What's the difference between a .COM, .NET and .ORG domain name? 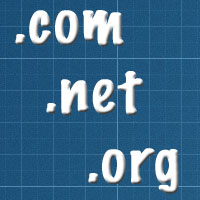 Each of these is what's called a Top Level Domain, or TLD. Domains ending with .COM are generally intended to be used for commercial businesses, which is why they're the most commonly seen domains in the United States. Domains ending with .NET are usually intended for networking services and internet service providers such as Comcast or AT&T's residential email addresses. For instance, an AT&T employee who also used AT&T for their home service would use name@att.com for their business email, but name@att.net for their residential address. .ORG domains are usually intended for non-profit organizations.

However, there's nothing legally preventing anyone from using a .ORG domain for a for-profit business, or a .NET domain for a nonprofit group. Many companies snap up all three variants in order to help protect their branding.

However, in addition to the "big three" (.COM, .NET and .ORG), there are several other TLDs which are available for just about anyone to use, including .BIZ, .INFO. .US and .TV, as well as a whole host of other, more exotic international TLDs which are rarely used in the United States (and which tend to cost considerably more).